Hi there! Oof, it’s been a bit longer than I intended since my last post. I’ve been keeping busy… I’m now halfway through my final placement and am starting to look beyond uni, putting feelers out there.

I have also participated in the LaTUCS semester 2 concert for 2018, last Thursday. Very fun indeed!

I’ve been cooking this and that – I hope to add to my recipe posts again soon.

I’m learning and growing and reflecting. Life is pretty good, if a bit hectic.

This week’s tasks include finishing my AHPRA registration (the thing that will allow me to practice as an occupational therapist!), learning different things on placement, and some adulting in the form of future-planning.

Hopefully, it’s not two weeks in-between posts when you hear from me next.

Around me, the signs of spring gently creep in. The trees that I call “early-budders” – often fruit trees whose leaves start as budding flowers in August. When I lived in my hometown, there were a few of these in the back garden, and my spring-and-sunshine heart would eagerly await their coming after the long dreary weather of winter.

In Melbourne, the First Australians consider this time of year to be “pre-Spring” (see my calendar post). I love this time of year and its heralding of new growth and sunshine after dark dreary days – it’s no wonder I’ve posted about it a few times before.

There are other signs of spring beyond the early-budders near my current home. The wattle trees are in full bloom, all yellows and golds with green leaves. The wattle took pride of place in a local event that happens annually a few suburbs over from me – the Wattle Festival occurred on Sunday. It was fun, with steam trains, live music, market stalls, plenty of food, and glorious sunshine. Here’s a picture of some wattle close to home! 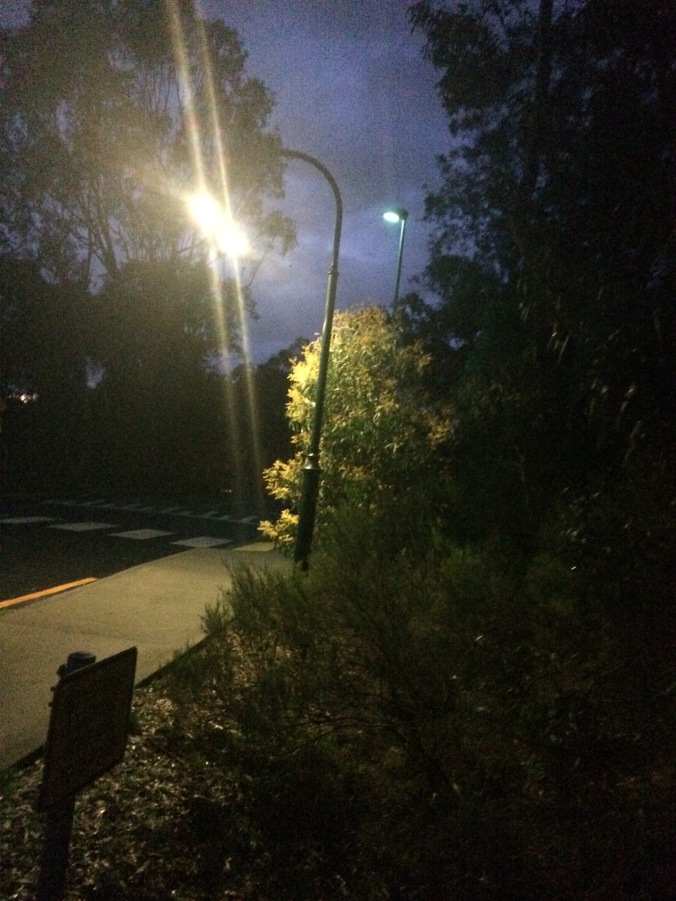 Another sign of spring are the lengthening days. We’re very close to being able to say that daylight lasts beyond 18:00 – and you can tell. It feels brighter of an evening, and of a morning too, where the sun rises before 07:00. It’s lovely! I’m going to enjoy travelling to and from placement in a couple of weeks because of that, despite the early hour I’ll have to wake up.

As you might have gathered from my absence last week, it was a busy week. I am so close to finishing the project. Huzzah! Once that’s finished, I have a few little side quests that I will do between now and the start of my final subject. As usual, the year speeds along. I will enjoy the chance to slow down next week, when I’m off on a holiday for a few days (more on that in another post!).

Tbh, the project work was useful in other ways last week, as it meant I was too busy to be wrapped up in watching the farce that took place in Canberra. They can swap PMs all they like, the fruit is still rotten at the core. Same policies, similar slogans, different salesman. Boo. As for our new PM, well – a “moderate” conservative wanker is still a conservative wanker, and a hypocrite to boot (worships the Prosperity Gospel, bleurgh). I wish that we could just have a Federal election already, to toss them out! (Dare we hope that the by-election Turnbull indicated will happen in his seat in the near future will speed that up?)

There’s better news in state politics. The RentFair bill has passed the lower house (yay!). This morning there was an announcement that the Victorian government will create a suburban Metro rail link. I’ve been saying there should be one for five years! (There used to be one, that Sr John Monash built, but lack of patronage closed it in the 50s.) It’s a massive long-term project, not a quick fix – starting in 2022, completed by 2050! Wow. Read more here. It’s a great idea – but the timing of the announcement is no coincidence, with a state election just under three months away. (Might be a good time to check if you need to update your details, Victorians.)

Let’s see, what else have I been up to?

On Thursday, I went to an event at uni. It was very swish! Yummy food, a few drinks, dancing… I love a good night out. 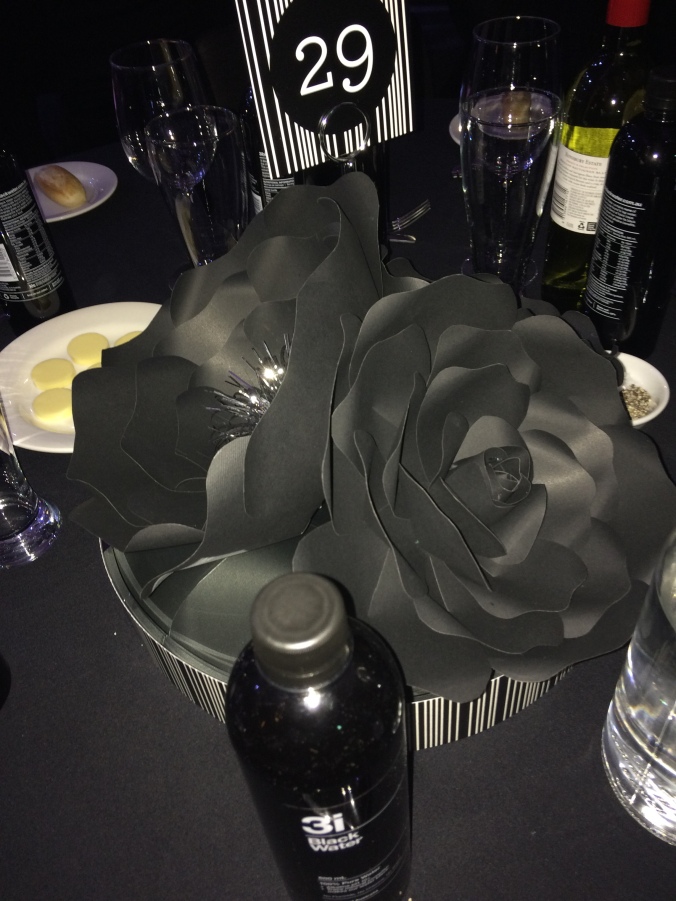 On Sunday, after the festival, my partner and I went to the cinema and watched MEG. It was a good movie, scary with some silliness to lighten things up as needed. It had a good cast, with competent women who took no bull from the men, and heroes with personal quests and failings, as well as a Rich White Dude as the human antagonist. They made the megalodon of the title appropriately scary, as well – not overblown, as I feared they would.

Oh yeah, and on Saturday I went to an AFL match for the first time in ages. That was a bit more tense than I’d expected, but as I was with people going for both teams, it was still fun. Quite the game, too! 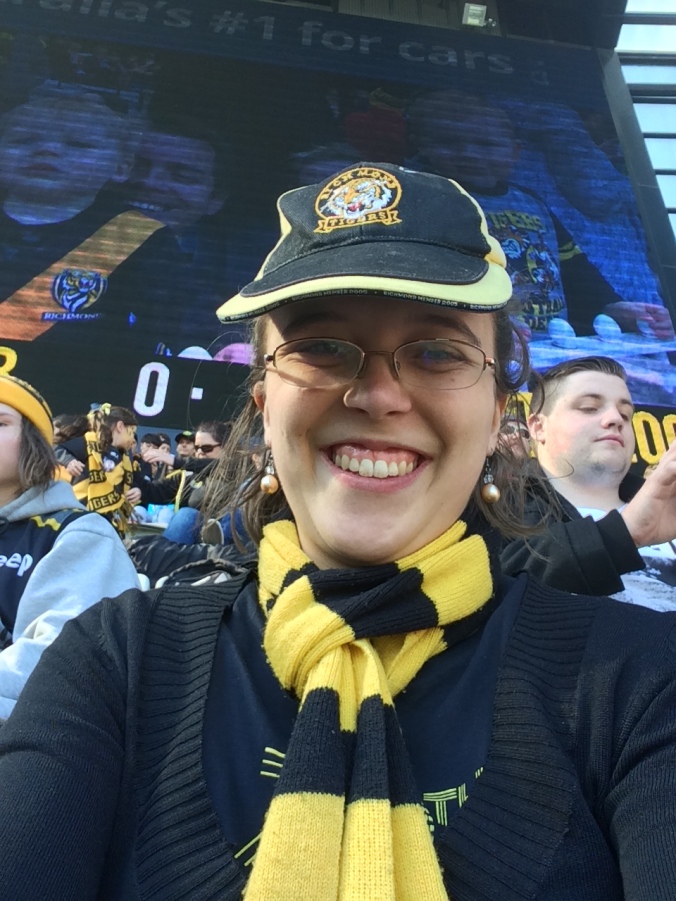 What have you been up to?

Btw, as I mentioned in an earlier post, on August 1, Facebook stopped allowing automatic syncing and sharing of posts. I’m sharing this one on my personal profile, as I’m not sure if I want to get a public page. If you’ve come from Facebook, please sign up via email or WordPress in order to keep in the loop!

After nearly four years, this is my 500th post.

Things are busy, so the post is mainly a re-blog of something I wrote elsewhere. Check it out. Melbourne Aquarium and MCG Trip.

So, my project meeting went well yesterday, yay! Now for the next milestone.

First though, I switch hats and for a few hours, I play the role of Choir President. My last Mid-Year Orientation Clubs Fest is here. Go LaTUCS! We have a mini performance, too. Just to show people what we’re doing.

Also, I read an article yesterday that made me go, “ooh, wow, okay.” So I’m sharing it with you all. The Book That Redefined My Outlook On Feminism

Quoted from the article:

“It was then I had my epiphany. I realised that feminism is actually a fight by one half of the population to be taken seriously by the other half.”

Anyone else just have that reaction?

Not quite sure it’s that simple, in terms of “two halves” and so on, but it made me think!

Check out this website. A friend shared TinyKittens.com with me, and since then I’ve been checking in with them regularly. The kittens are so cute and the stories, while sometimes heartbreaking, are wonderful.

They have a Facebook page and a YouTube channel. It’s adorable! They’re a group in British Colombia, Canada, who are advocates for a “Trap-Neuter/Spay-Return/Adopt” model of care for feral cats. It’s an interesting idea. If you want to know more, check out the links. Also, if you’re relatively close to the location, there are kittens and cats who are ready for their forever homes. Check out their stories via the links.

I wish there was a Tiny Puppy livestream, haha. ❤

Other things I’ve been doing lately include the next phase of my project placement (moving from literature searches to analysis, yay!), reading (I’ll post reviews of my latest haul shortly), choir organising (LaTUCS is back for semester 2!), cooking (more recipe posts soon!) among other things. 😀

Not something I thought I’d say much….but I’ve been reflecting lately. This winter has been too dry (multiple sources have confirmed it) and it’s nice to have rain. Including proper heavy rain-on-roof pattering, not just grey drizzle (looking at you, hometown, and your three plus weeks of nothing but that in the past). What’s the weather been like in other places?

I had a routine while on placement for the start and end of the day. Upon arrival at the community health centre I worked in for placement, I’d sign myself in, receive my student/visitor pass and stick that in my pocket, looping the lanyard through my belt-loops or similar (hate wearing those things ’round my neck). I’d then put my name-badge on. The afternoon ritual was the reverse. Sign out, return pass and take name-badge off as I put on my coat, scarf and beanie. Then I’d walk to the bus stop and head off on my way home.

Rituals and routines are interesting things. They make us as humans – we’re creatures of habit and without them, we feel uncomfortable, some more than others. I bookended the start and end of my day with the ritual of pass + badge on and off because I’d learnt in the mental health subject just prior to placement that those sort of rituals are useful to separate “work” and “life”. It really helped, too, in that first week when everything was a little overwhelming and intense. It was an “I don’t have to think about that anymore today!” trick.

But that meant it left me with a funny feeling when I signed myself out that last time (at least, that I know of….). I worked with a great bunch of people and I learnt heaps. I’m already applying it in my next subject. 🙂

My weekend was a mix of busy, relaxing and fun. In different intervals. Organising something is good – even better when people respond to it with enthusiasm. Hanging out with people and letting other people do the organising (while being very appreciative of them) is also good.

I had fun with friends and made a few new ones, as well as enjoying plenty of good food. I reflected after the second event that when it comes to me and social events, I tend to measure how good of an event it was for me by the quality of the conversations I had with people at that event. If I talked deeply with someone or shared stories with them about mutual interests or an interesting topic that I hadn’t heard about before or something. Bonus points if in one of those conversations, I made a new connection or two or learnt something new about a friend. Light and fluffy conversations are cool too.

Oh yeah, and on Saturday I made myself brunch of sourdough toast (last slices before it went bad 😦 ), beetroot and chickpea dip, “boiled” egg, bocconcini balls and lettuce – leftovers from an event the night before. Verdict: delicious. 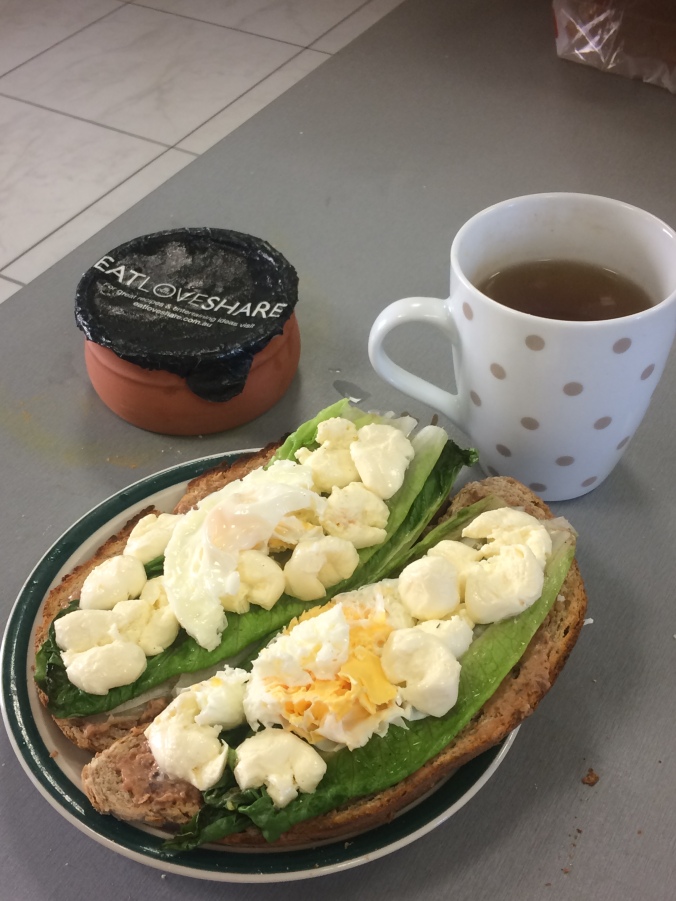 Today’s breakfast was a smoothie with wholegrain toast slathered with margarine. Yum!

Smoothie ingredients: 2x overripe bananas, 8x soft strawberries, 1x 250mL orange juice bottle – all of which needed using up. Plus 2-3 tablespoons Greek-style yoghurt and Weetabix Bites crumbs (i.e. wheat flakes with the occasional berry piece). Blend all together until smooth, then enjoy. As you can see, I’ll be having this tomorrow as well… I made nearly a litre of the stuff – the cup below was my second and that jar is 500mL! :O 😀 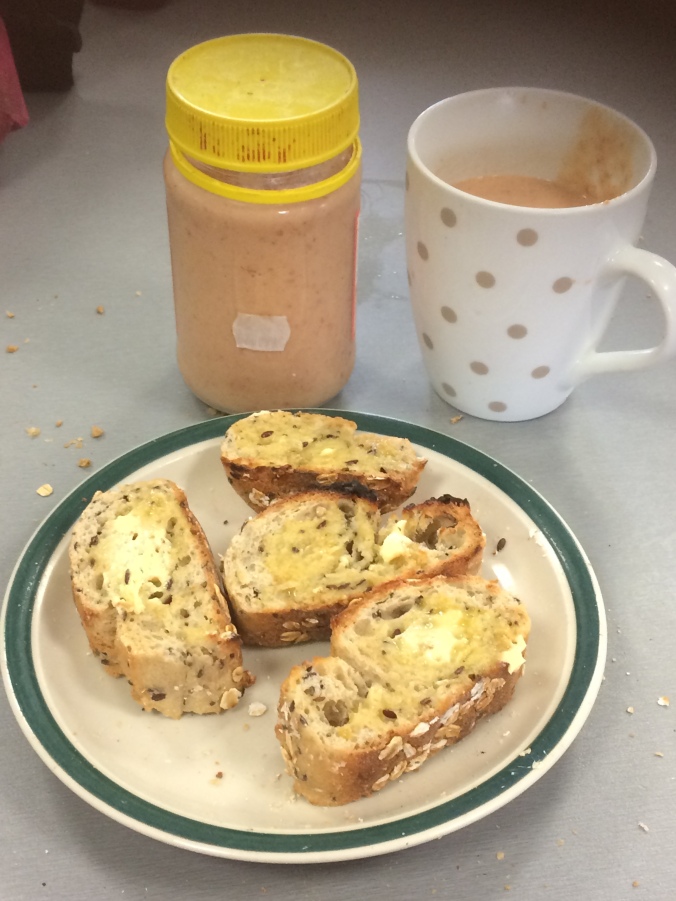 Finally…. I haven’t written a political post in a while, because these days I don’t really have much headspace for it. But today, let’s just say that the note on my About page saying that I “reserve the right to disown the govt we’ve got, because they don’t speak for me” really applies on several fronts – namely, regarding refugees and marriage equality. It’d be nice if we had people in govt who had spines and a sense of decency… Some things have gone on for too bloody long. -_-