It’s that time of semester again. Choirs are in the final weeks of preparation for semester 1 concerts. It’s been a bit strange for me – it’s my first year of experiencing this from a non-student choir member perspective, for one. For another, I’m singing in two choirs this year – LaTUCS and MonUCS. So that’s double the work – and fun. I just spent the weekend at a choir camp (for the latter choir) and then an all-day rehearsal (for the former), in preparation.

Below are the concerts coming up around Australia for the various choirs of the Australian Intervarsity Choral Societies Association (AICSA). I’ve grabbed them from Facebook, so follow the links to nab tickets! 😀

On Saturday, May 11th at 7:00PM, Sydney University Madrigal Society’s first concert of the year, Sublime & Ridiculous, will take you on an adventure to the weird and wonderful world of Renaissance musical humour. Check out the Facebook event for details! https://www.facebook.com/events/2365750140315595

ANU Choral Society’s next concert is on Sunday the 19th of May at 5PM at St Peter’s Church in Reid, Canberra. SCUNA will be performing some much-loved gems of the repertoire, including Purcell’s ‘Come Ye Sons of Art’ and Vivaldi’s ‘Gloria’. Tickets are just $15 and the concert will be held at St Peter’s Lutheran Church in Reid, 5pm on Sunday 19 May. Join them for a lovely evening of music-making! Tickets via www.trybooking.com/489818

Step into a world of pure imagination with MonUCS: Monash University Choral Society! MonUCS will weave magic with music from many realms, including Harry Potter, Game of Thrones, and Lord of the Rings. They’ll be performing at Chapel off Chapel in Prahran, 25 May, 5:30pm and 8:30pm. Tickets available via https://chapeloffchapel.com.au/…/pure-imagination-fantasy-…/

No matter the stress or processing load of the day, I can walk into choir and relax during the singing parts. If I’ve had a busy day I need to give myself alone time before I can “people”, or interact with others, as despite my extraversion crowds can be overwhelming, especially at the end of a long day. (More on that in another post.) The actual rehearsal bits are fun regardless. I love getting into the rhythm of songs.

This year is different too, as I am no longer a student and therefore aren’t the one organising things. It’s nice to be on the other side and I have confidence in the current committees.

Today both LaTUCS and ROCS (RMIT Occasional Choral Society) are taking part in promo events on campus at Bundoora and Melbourne city respectively. I wish them luck!

If you’re interested in singing, why don’t you come over and have a go? Our choirs have no auditions and are very friendly places. Everyone can sing in my opinion – and singing is good for you, too.

Singing is such a big part of my life and I wouldn’t change that for the world.

The next few weeks have a few lovely choral evenings open if you’re in Melbourne.

Firstly, this week, MonUCS (Monash University Choral Society) are performing two shows for their “Music Through Time” event. “Join MonUCS as we take you on a musical journey through time in this whirlwind tour of choral music from the 12th century all the way to the 21st.”
Friday 18th (7:30PM_ and Saturday 19th (7:00PM) – get your tickets here: https://www.eventbrite.com.au/e/music-through-time-concert-tickets-45288554285?aff=efbneb
Facebook event here: Music Through Time
I’ve heard good things about it and I can’t wait to see all their hard work paying off. 😀

Then, next week, LaTUCS are having our concert on Thursday 24th May at 7PM. 😀 It’s going to be lovely, we’ve got songs from across the world in different languages to sing to you. We’ve called it, “Language of the Soul”. Facebook event here:   https://www.facebook.com/events/586094155090992/

Come along and be entertained and delighted. There’ll be something for everyone, so spread the word!

Hopefully soon I’ll get a chance to publish some recipe posts and finish off the Japan trip ones. For now, though, here are a few pics and notes from the last week or so, of things that have been making me happy.

Add to this: the ducks I saw walking through uni to choir; the 20+ rainbow lorikeets taking a bath and feeding in the front yard of a place I walked past the other day; the simple peace of drawing and colouring a picture.

Atm I often leave placement at the end of the day feeling like my brain has been used, and used well. I’m learning lots, about occupational therapy in mental health, transferable skills, and about myself. There are rewarding and challenging aspects, and reminders of why I chose to do OT.

I’ve also had some fun times with my uni housemates and friends. Some of us went on a specially-organised cruise on a “showboat” this week!

And LaTUCS (my uni choir) is back for the year. Check out http://www.latucs.org.au and http://www.facebook.com/LaTUCS for more info.

Writing this quickly before I head off to my last choir night of the year.

I’ll write a review of the concert I attended on Saturday (MonUCS’ “ORGANic Christmas”) tomorrow. I want to do it justice and time slipped by me today. In part because less sleep last night from a choir holiday party combined with the afternoon sun on a 37*C day is not conducive to productivity, I think. XD

Choir parties are the best – always great food and conversation with lovely welcoming people. Last night’s one had Karaoke even!

Carolling with MIV – and at LaTUCS’ own gig – has been really lovely this year. My favourite carols are a lot more complex now than the favourites I had when younger and it’s really nice to perform them with friends.

There are still a few chances to see the MIV carollers in the lead-up to Christmas, but I won’t be among them.

As of next Monday, I’m off to Japan on a family holiday until the New Year. I will try to keep you more-or-less abreast of our journey with the help of Womble again  I make no promises as to when any updates will occur though.

Must dash to LaTUCS now….

Remember to buy concert tickets to see the MIV choir with soloists and orchestra perform on January 20th (less than ONE MONTH to go!!): Facebook event here and tickets here. Monday was spent getting decorations for MIV with other committee friends…. I’m getting excited now.

This weekend (starting this evening) I will be a-carolling with MIV2018 people.  Tomorrow afternoon too. Our concert tickets for the end-of-festival performance are on sale now. Put the evening of the 20th of January 2018 in your calendars (Facebook link here – friends should expect invites shortly) and get some tickets via this link.

Also, MIV merchandise sales close on Monday, December 11th – this coming Monday which also happens to be the one-month-out date! Wow. If you want a tie-dye tote bag, a keepcup, promise of concert CD and participant photo, or tickets to the “Aquademic” Dinner, please head on over to miv.org.au, sign up for an account on the website and buy the things you want.

This weekend has other fun apart from carols. Tomorrow evening I’m attending a choir concert by MonUCS. Can’t wait – the program sounds really good. 😀 Here is a link to the Facebook event and click here for tickets (or get them at the door). Hooray!

If I’d remembered, I’d have put this up at the start of the day! As is, however, it’s here. LaTUCS (my choir) is going to be singing in a concert in early September as part of a massed choir. It’s going to be amazing!

It’s a performance celebrating the life of General Sir John Monash, the unusual general. Below is some context. 🙂 If you’re interested, the concert is on September 9th in the evening at Hamer Hall, Melbourne. It’s going to tour to other Australian cities for other community choirs afterwards! If you’re in Melbourne and surrounds, come along down to see us – tickets are selling fast so book now!

It’s shaping up well if I do say so myself. And we’re (re)learning a bit of history along the way too… The project is run by More Than Opera and will be conducted by David Kram. We’ll have soloists and an orchestra with us, the massed choir (adults and children). Be there!

*Hums Let There Be Peace under my breath*….hm, now I’m going to have the Cantata songs in my head all night. 🙂

A world premiere event honouring Australia’s greatest son, John Monash.
Don’t miss out on being a part of this unique event! 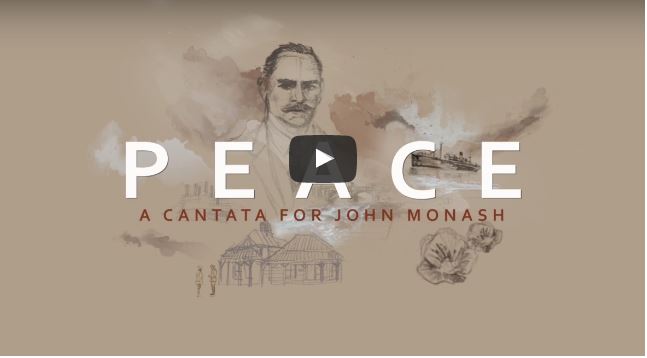 A new documentary video for Peace – A Cantata for John Monash!
Who is Sir John Monash and why we set his life to music

0808 – Anniversary of the Battle of Amiens

On this day 99 years ago, Gen. John Monash led the Australian forces in the Battle of Amiens in France. The victory was a turning point in WWI which halted the German advance, and for which Monash was honoured with a Knighthood on the battlefield by the King himself. Monash used his incredible intellect and broad knowledge to utilise all available technologies in a concerted attack which resulted in the war ending sooner, and countless lives to be saved.

MTO honours this largely unsung hero with a grand concert worthy of the immense impact Monash had on Australia, and the world. This promises to be a memorable concert for everyone to know and understand the impact John Monash has had on this city.

Don’t miss out on this unique opportunity to be a part of this world premiere event!

THE MAN, THE MUSIC, THE MOMENT

GET YOUR TICKETS NOW!

Today I woke up in a bit of a mood because last night I had an unsettled night’s sleep…. just when I didn’t need one. After all, I reminded the rest of my choir to sleep well, because today’s our concert day! And I have uni and things to do first.

I’m revived by the brisk walk I took in to uni and have a plan for the day. Everything will get done that needs to – and at the end, party time! We’re looking to livestream the concert too, so hop on to our Facebook page (LaTUCS) around 18:30 tonight and watch us sing!

I’ve been busy lately! It’s my final week of my first subject for uni this year. This week I learnt that presentations are boring when it’s just listening to everyone summarise article appraisals! 😛

Today I’m doing something much more fun. It’s my uni’s O-Week, you see, and as I’m the Vice-President of the choir I’ve been planning for the big event: Clubs and Societies’ Festival, the day where all the clubs and societies at uni get to show off and try to attract members. I’m excited! It should be fun. I like meeting new people and singing is my jam, so let’s get into it. 😀

Another perk is being able to have advance knowledge of what my choir, LaTUCS, will be doing this year. We’ve got some pretty cool ideas in the pipeline.

Being V-P has been really good so far. It (and my other role on the MIV Committee) have been teaching me a lot about: how meetings work; delegation and collaboration; and event organisation, among other things. I love singing. Choir is such a great way to relax and have fun with friends, to meet new people who share interests with you and generally have a good time.

I imagine I’ll be quite tired by the end of today though…See you on the other side!