What a hectic, busy week. Note to self: organising extracurricular activities whilst adjusting to a new subject is hard. Doable but hard.

I’ve said before, I enjoy cooking for myself. Last night I rediscovered that food cooked yourself is also therapeutic. You know, I didn’t think I’d say that, because I used to find cooking a little challenging. Now, though, when I’m just cooking for one/two, it’s fun. Sure, you still have to remember to gather all the ingredients together (there have been a few times I’ve got downstairs only to remember I left something vital up in my room), and monitoring/ understanding how to cook things “just right” without burning, over- or undercooking them is a learning process. But I’m improving, I think!

Last night I even managed to cook rice in the bottom pot in the boiling water, while the veggies cooked in the steamer pot on top. At the same time, I was supervising the cooking of a chicken thigh, smeared in “Moroccan spice”, an amazing spice mix from the supermarket. It’s delicious and created a nice thin “crumb” almost. Next time I might remember some flour to spread it out a bit more, though idk. It tasted pretty good without it. Making food choices and experimenting with flavours is a great way to take my mind off a stressful situation or unhappy mood (albeit, it helps if you’ve got an appetite). 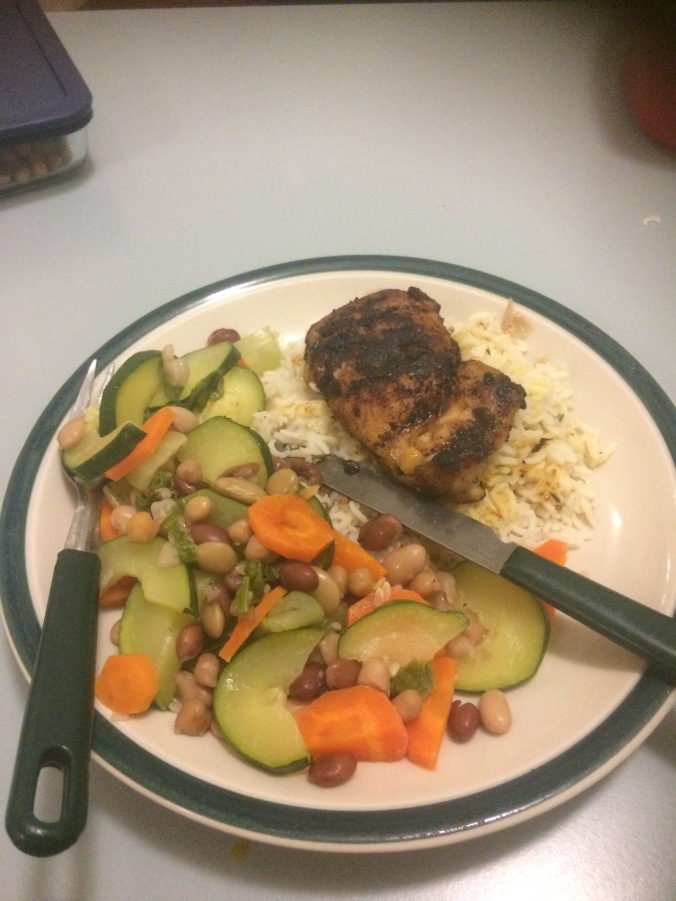 Other meals have included:

A beef stir-fry with noodles: 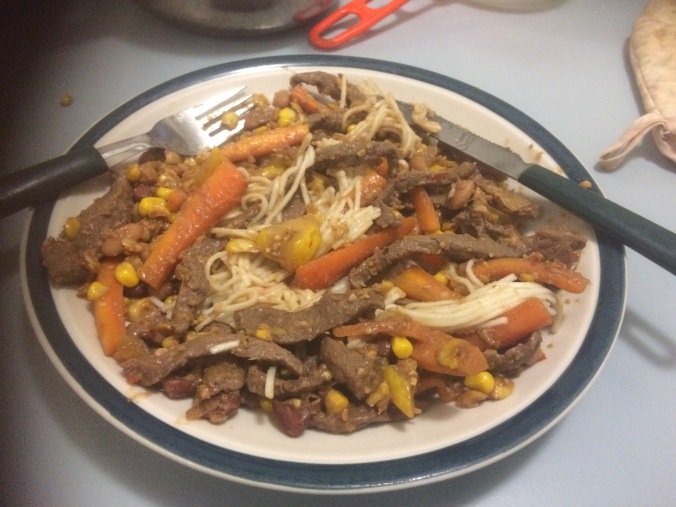 Yum! There’s something nice about how the flavours of a stir-fry – garlic, chilli, ginger, oyster sauce, fish sauce and soy sauce – come together with the veggies and the meat. I used my pot rather than the frypan, as that’s the bigger of the two and I don’t have a wok (well, there are communal ones, but I try to avoid using them given I’ve got my own things). It worked out well, if I do say so myself.

Hamburgers cooked in pasta sauce and mixed-herb-flavoured chips with veggies: 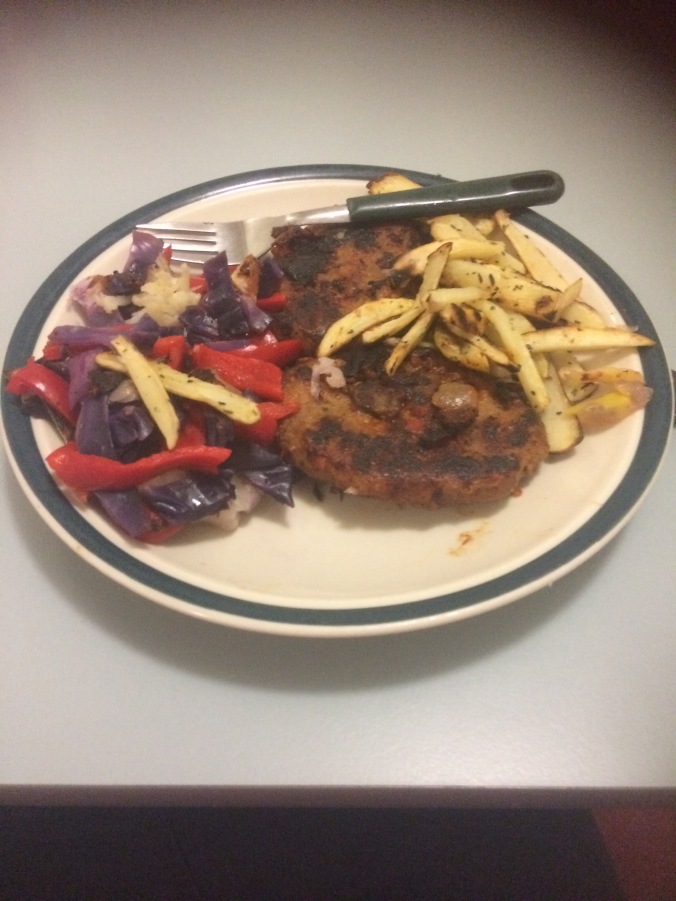 I like adding mixed herbs to things for a bit of extra punch. It’s better than salt! I had some pasta sauce in the back of the fridge that I needed to use up (given that it was opened the other week when making a bolognese). So I used it as the base (tipping in a bit at a time) and cooked the hamburgers in it. So yummy!

Another thing I’ve been experimenting with is breakfast. Usually I’ll have porridge/ muesli, or weetabix. I’ve discovered that weetabix is nice warmed up (never tried it until now because I didn’t like the idea – but I actually prefer warm weetabix to cold I think!). On blood donation days, or days when I feel like an extra bit of something, I add egg to the menu.

I scrambled an egg in a mug in the microwave on Tuesday, then added it to some fried-rice leftovers to have for breakfast (I’d eaten the other half of the leftovers for lunch the previous day). Then yesterday, I decided to do it again because I hadn’t had much food the day before and knew that I needed to have what I call a “worker-bee day”, for uni work. Only this time, I accidentally poached the egg by not whisking it but popping it in the microwave for about 20 secs to see what would happen. I then gave it another 20 or so secs and voila! The yolk was still runny and the white just firm. Delicious! The drink in the picture is some of a smoothie I’d made the day before to use up an overripe banana, some veggie juice I’d saved after cooking and the last of some stewed plums. I just blitzed them in the blender on low until they seemed all together. 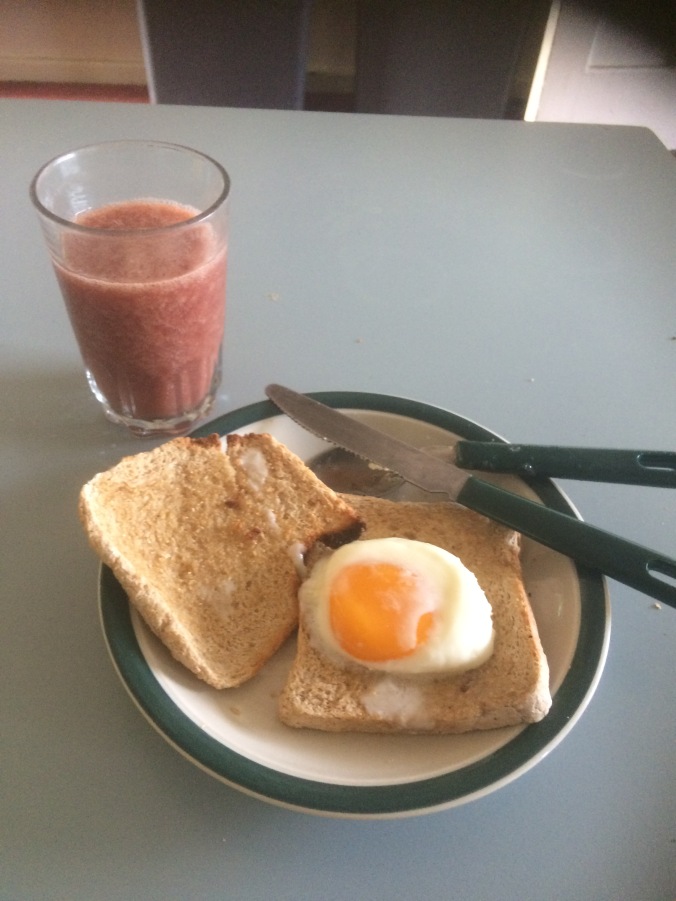 All in all, I’m having fun with my food choices.