(Seen on I didn’t have my glasses on, last year!)

I love this time of year that I call Christmas. I’m Catholic so there are religious connotations, but beyond that I also love the very spirit of the season. Whatever one celebrates this time of year, there’s often some form of the same spirit floating about: the spirit of joy and goodwill and kindness; of family and friends; of food, conversation and good times; and just the sheer energy of things and “general 😀 ” as I commented elsewhere. I don’t care what you’re celebrating at this time of year in name – Yule, Hanukkah, or something different. Have fun. The things I’ve just mentioned seem to happen regardless of what one calls it.

Though I dislike “Consumerist-mas”, particularly the excessive use of the season as a ploy to drag people to shops. Toys/gifts are part of the season and something that’s looked forward to, but they come packaged with the conversation, food and good times. They’re not everything. The older I get the more I realise that it’s the experiences that matter, not the things…and that my memories of Christmas are so special because of the people and fun in them, more than the things.

Another thing I love about Christmas are the songs. As I said last year, however, I can be a bit picky about them!

“One of the funny things about living in Australia is that, as a lot of things have a Northern Hemisphere slant, some holiday songs just don’t fit the season. Of course, there’s nothing wrong with singing the ‘traditional’ songs…..but when looking for non-religious carols, I like the ‘neutral’ (no reference to weather) or Australian-tailor-made ones better. There are plenty of those of course – you just have to find them.”

So no “White Christmas” from me. I’ve grown to dislike the song because I keep getting it stuck in my head and I do not want it there. I’m currently trying to think of a good parody to turn it into a Southern Hemisphere song…

In honour of the fact that it’s two days until Christmas, here are a few of my favourite carols, religious and otherwise, which are either Australian-based or don’t have a real weather indicator. This year, I could think of more religious carols than secular ones….

And see here for a five-hour-long selection of carols that a Facebook friend found.

Silver Bells:
A song about the joy of Christmas time “in the city”.

Carol of the Bells:
A fast-paced tune. I sang this as in SSA arrangement as part of my high school choir some years ago – it gets really high, even for Sopranos, in the climax of the song.

Christmas Day (The North Wind):
I learnt this for the “Little Bit Like Christmas” concert I performed in recently. I quite like it – it’s a short Australian one.

Have Yourself A Merry Little Christmas:
Another nice secular one. Some of these are a bit cliche, but I’ve had them in my head lately….

Christmas Day, Australia Way:
A song from the perspective of an Australian stuck overseas at Christmas and missing home. He lists a bunch of places in a wistful remembrance.

There Shall A Star:
By Mendelssohn. A powerful religious song which I also learnt for the “A Little Bit Like Christmas” concert. I like this one more for the musical composition (if that’s what you call it) than the words, though the words aren’t too bad either…

The Shepherd’s Farewell:
Beautiful music that I heard at the “Little Bit Like Christmas” concert.

Minor spoilers for Fantastic Beasts and Where to Find Them in the link below. I agree with what’s said…there’s something that makes me smirk about the idea of a woman using her “feminine wiles” as a way of operating, guided by her brain. It’s not (as I first worried) that the feminine side is being used to hide the brainy side. It’s that both “sides” are one, working to achieve her aims.

If you’re like me you’ve been listening and watching the news coming out of Aleppo, sick at heart and feeling like you want to back off because it’s all too much.

Here is one way of helping.

On Monday, VCE results came out. Among all the stories of achievement there were a few interesting ones. Like the one about Saad Al-Kassab. A Syrian refugee who came to Australia two years ago and has only learnt English in that time, he has graduated as dux of his class, with an ATAR of 96.65. Way to go, mate!

Recently, the topic of refugees and education has reared its head in a different form. Check out this article – the group Teachers for Refugees is standing up for those in detention by wearing t-shirts with slogans in their classrooms this week. Naturally, the government aren’t happy, saying silly things like “politics doesn’t belong in the classroom”. As the article says, of course politics belongs in the classroom – how else are students supposed to engage with history and current events? They have a right to speak their minds about the hell in detention (and to protest against the Border Force Act that stops them). Our treatment of asylum seekers is shameful.

If we gave them a chance and brought them here, imagine how life could be. Saad Al-Kassab started off in Australia working as the school’s gardener and after a few months got into the classroom. He now wants to go and study medicine. I wish good things for him and his future and hope that others will get the opportunities he’s received soon.

Haven’t made as much progress this year as I’d have liked, but I’m working on it.

I’m a giver, in many ways. One way of showing this is to be a Blood Donor – of Plasma to be exact. 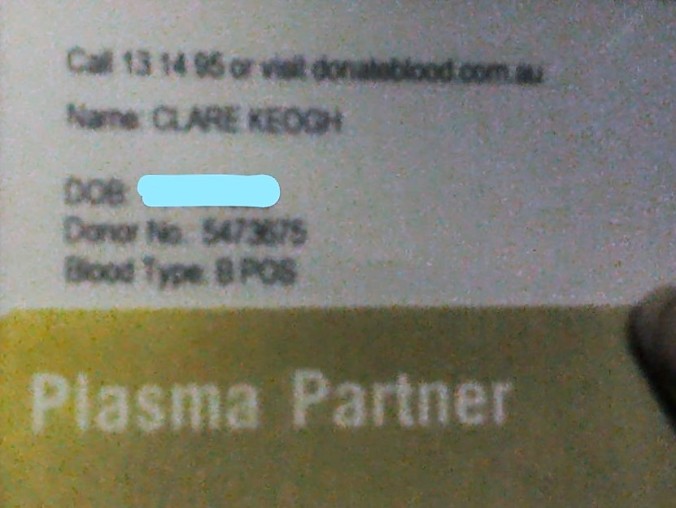 Scheduling this is the tricky bit, but it can be done every two weeks if I chose. Plasma recovers fast. It only takes a little time out of your day – a perfect chance to catch up on reading, or watch a TV programme, or just relax. Good downtime!

The other day, I put myself on another register, which I’d been meaning to do for a while:

I’m now on the Organ and Tissue Donor Register. I said yes to everything. So, if something happens to me and I die, my organs and tissues can be removed and given to someone who needs them. It means a lot to me to think that if I do die “before my time”, I might help someone else regain a full life.

Also today on my newsfeed, I came across this:

Chris Cincotta of Humans in Melbourne was in the position today where he helped save someone’s life. Quoting from the above post, “This is what I know for sure. In that moment, when something had to be done, I remembered my first aid training.
If you haven’t done your first aid or CPR please book in now. You might save a strangers life or even someone you love. I’m still a bit shaky and bloody emotional but it could of been a lot worse and this story would be a lot different if not for learning CPR.”

I know CPR and have a Level 2 First Aid Certificate, due to work. I’m so glad I do.

This weekend, after several weeks of hard work (both as singular choirs and combined), we are performing a Christmas Concert: A Little Bit Like Christmas, on Saturday evening in St Stephen’s Anglican Church, Richmond (360 Church Street, Richmond, Victoria 3121).
If you’re in Melbourne, come along! Tickets are on sale now: https://www.trybooking.com/book/event?eid=246657

Each choir will be singing a few songs by themselves and then all three choirs will join to sing some others. The songs are not your usual Christmas carols – they’re a little bit different. It’s bound to be a fun night. The concert starts at 19:00 on Saturday 10th December – if you’re in town I hope you can make it.